Groundhog Day: A Short Look Back 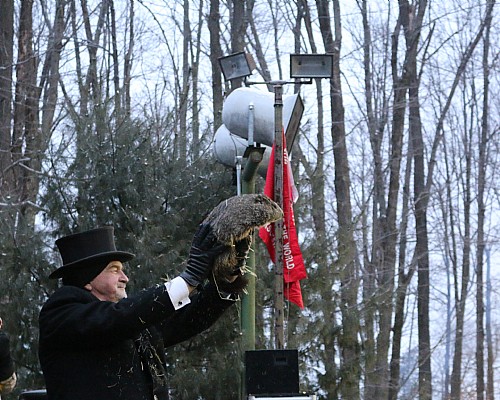 For those that don't truly believe the prognosticating power that Punxsy Phil has, let's just take a look back at the days leading up to and through Groundhog Day.

Appearances with Phil during the final week before Groundhog Day come fast and furious. Trips to different venues, TV appearances, well you get the picture. Now stay with me for I am prone to ramble. All during this time the entire United States was in the throes of a particularly harsh polar vortex. Brrrrrrr! Phil, however, soldiered on through this harsh weather and made every appearance he was scheduled to do. A rational person would assume that a hibernating animal thrust into one of the worst cold snaps we have endured in a long while would throw up his paws and infer that this was craziness and endeavored to remain securely in his burrow until spring. Not Phil! I guess, as his handler, that should have been a clue to me.

Next we move to “the knob”. Gobblers Knob to be exact. When it was time to take him to the knob he actually came along quietly. No gnashing of teeth or tearing of gloves. In fact he seemed to be in a zen-like state of total calm as we placed him in the stump to await his time in the spotlight. Now I am starting to wonder just what is going on!

Like everyone who came that weekend, I stood in the 3 degree weather during the fantastic show that is provided each year. Speaking with friends I've come to know over my 20 years in the club and hopefully, new friends that I'd just met that evening. Marveling at the distances people traveled to share in the celebration of Groundhog Day. People from a majority of the states here in the U.S.A., to Canada, Peru, China, Russia, and I know I'm forgetting a few. Sorry! At that moment, as I stood among 30,000 plus people, I thought to myself “wouldn't it be nice if all of these faithful followers got and early spring”. Of course then reality came crashing back in as I realized my fingers had gone numb and that thought quickly exited my mind.

Now it's showtime and the temperature had climbed to a balmy 10 degrees but my fingers were still numb. While I was still holding onto a glimmer of hope for an early spring, I have become used to the disappointment of a forecast for 6 more weeks of winter weather. We were in a polar vortex for crying out loud. As my handling partner AJ Dereume and I through open the doors to the stump my heart sank. We were met by a sea of hay but no sign of Phil. To me, this meant just one thing. He had burrowed in and was preparing for a long winter. Just as I was ready to submit to the polar vortex and accept that at least for this year it had won, a nose, then a head popped through the hay. I pulled him from the stump with very little effort or resistance and handed him off to AJ for the prognostication. I stood with fingers crossed, or at least I think they were crossed as they were still numb, and wished to hear my two favorite words in the English language. Early spring! Much to my joy those were the words Phil had spoken to President Bill Deeley.

Did Phil know what his prediction would be before he did not see his shadow. Well, as much as I would like to think he did, it is doubtful. But I will tell you this. From here on out I will be paying closer attention to Phil's demeanor in the future just to see if I can glean anything from it.

I would like to leave you with this. For those of you who are at this moment shoveling snow or dealing with cold weather, remember Phil predicted an early spring not an instant spring!

More by this contributor: 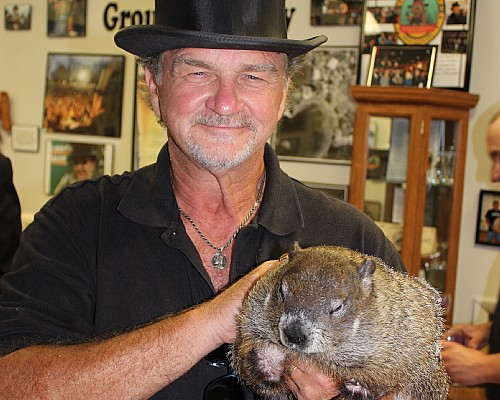